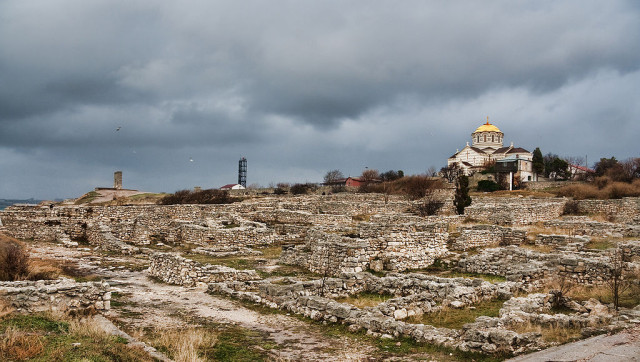 Chersonesos, in southern Crimea, Ukraine near modern Sevastopol, is a multi-phase site with major occupations that span the Greek, Roman and Byzantine periods as well as the Crimean and Second World Wars. The Institute of Classical Archaeology at the University of Texas at Austin have been collaborating with the National Preserve of Tauric Chersonesos there since 1992 on a variety of projects including excavations in the site’s extensive agricultural territory and within the ancient city centre. They are also developing a comprehensive conservation and site management programme and are undertaking a number of research initiatives aimed at understanding the history and daily life of the occupants of this important site.

L – P : Archaeology have been involved in the project since 2003 and have helped develop recording systems for its excavation, conservation and site management efforts as part of the large, international team. With so many diverse projects represented within this collaboration, ARK has integrated a wide range of existing datasets and provided a framework for the multi-lingual team to share and explore each other’s results.

One of the joint project’s major objectives is to take full advantage of the Web for publishing and disseminating its data. ARK is well-suited to help accomplish that goal. In the coming months, an extensive excavation database from the southern region of the ancient city will be imported into ARK in order to evaluate its potential for distributing the data as a companion to a the print publication of the excavation.

An open source solution to project recording. Get ARK Now